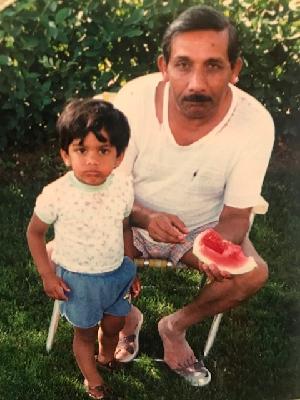 For the 2nd year, I'm racing the United Airlines NYC Half Marathon this March with Team Zero and joining the fight to end prostate cancer. 1 out of 7 men will be diagnosed with prostate cancer in their lifetime, and nearly 30,000 men will lose their respective battles each year.

In 2010, My grandfather, Clarence Mendis lost his battle to this disease. Clarence was an incredibly special person, as his bravery and generosity throughout his life would go on to touch many others, most of whom he'd never meet. In 1966, my grandfather, with less than a high school education, packed up his young family in the small island country of Sri Lanka, and immigrated to Montreal Canada. Having never seen snow, not speaking the language, he was determined to create a better life for his family and those to come. The first years were difficult, as finding a steady job was challenging, yet Clarence and his family would not be deterred. His wife, Jane, would work as a seamstress in a factory to keep the family afloat as Clarence worked towards a career.

Clarence would go on to work for the city of Montreal as a building inspector for nearly 30 years. Along the way, he'd watch his 2 children grow up, marry, and be lucky enough to see his 6 grandchildren grow into young adults. Clarence and his wife would travel the world, and share amazing memories with friends and family. Throughout his journey, Clarence never forgot where he came from and what brought him to where he was. He was the first to open his home, wallet, and lend support to numerous other Sri Lankans that would go on to make the same journey of emmigration, including my father, Nimal Perera.

At Clarence's funeral, numerous friends/family whom he'd never met, came to pay their respects, knowing full well that their life could have been very different had not made that courageous move many years ago. They came to say goodbye to the man who paved the way. The dreamer.

Thank you for reading and supporting me with any donation you see fit.

ZERO is a national non-profit with the mission to end prostate cancer. With your help, ZERO can support more prostate cancer patients and education more men about the risk of prostate cancer. To learn more about ZERO, visit https://zerocancer.org/why-zero/our-mission-impact/.

Thank you for helping make a difference for prostate cancer patients around the country!